What are your thoughts on the last classic Tomb Raider game?

I really liked the VCI levels a lot, the Rome and Russian levels were OK, but I didn’t really like the young Lara levels.
Top

It’s alright. I was only excited for the TRLE. I prefer TRIII.
"Well you have my total attention now, I'm not quite sure if I've got yours."

TRLE was a revelation when I loaded it into my PC that November and started building my own levels.
Top

I like all Tomb Raider games so I also like TR5. I played it only twice. Same with me, my favourite location is VCI. I like this futiristic athmosphere in those levels. My second favourite are Ireland levels. They have soooo good athmosphere. Third favourite are Russians levels and fourth are Rome levels 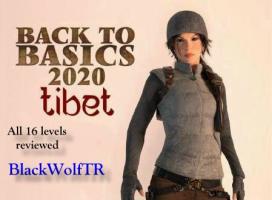 TRIII & Chronicles have the most in common; Episodic level structure, military bases, stealth sequences, desert eagle, catsuit, etc. I just felt Chronicles was just on the easy and linear side. It was like a B-slide of cut TR levels. I thought TRIII’s increased difficulty, level complexity, and atmosphere was perfect. Still is actually, I tried playing Legend and Anniversary, but find TRIII to be far more immersive with better controls and overall superior. Chronicles does have a better presentation and is more put together in storytelling. That’s only because it’s serving as a bridge-game between TLR & AOD, which are more character driven than previous efforts. I agree with you in that the Black Isle/ VCI levels are definitely the highlights in Chronicles.
"Well you have my total attention now, I'm not quite sure if I've got yours."

Purchased it when it came out, but I did not enjoy TR Chronicles very much, too easy and too linear, and no proper story, although the Ireland levels were good, and very atmospheric. TR3 was also my fav

As for the level editor, I might have taken a look at the CD, just to see if there were any extra levels hiding, but I didn’t pay much attention to the editor itself, too much technobabble. I put it to one side and waited for some levels to come out. Due to a house move I didn't get to play my first custom level until August 2001, by which point this site was running and there were loads of levels. I was amazed by the quantity, less so by the quality (with several exceptions). I did eventually start building, about a year later.
Last edited by Dick on 31 Aug 2020 10:36, edited 1 time in total.
Lawther's Books

While I loved the Ireland levels overall, I didn't like that they got associated with young Lara. I wish there had been more attention paid to adult Lara visiting some of that same scenery. And as usual, it bothered me that there were un-playable areas (houses/huts up on hills). But overall, it was a fantastic game. I regret not taking the time to learn how to build as soon as I got it.
Live every week like it's Shark Week!
Top

TR3 is also my favourite but I think that's mostly because it was the first one I ever played. All TR's have some good memory for me, including TR5.

And just to give some perspective as to the extremely high quality of TRLE levels out there, I'm currently playing TR3 right now and I can find SO many instances of "wallpaper" texturing that would be crucified if released as a TRLE. I'm repeating everybody else, but TR3 was my favourite by far.

But... I thought TR5 was great, in spite of a few unnecessary bugs. Unfortunately, the public is never satisfied, so that led to the rushed AoD and then to whatever it is these days.

Honestly, I didn't like it overall. It was pretty short, but they made it even worse by trying to prolong it with too many out-of-place cutscenes, closet examining animations and some other tricks.

On the bright side, I liked Rome levels and I kinda liked young Lara environment.

But... I thought TR5 was great, in spite of a few unnecessary bugs. Unfortunately, the public is never satisfied, so that led to the rushed AoD and then to whatever it is these days.

As far as I know, Chronicles and AOD were being developed simultaneously, with the Core team split into two, one half in charge of each game, due to deadlines and apparently a demand from EIDOS to have one Tomb Raider release per year, which is why both games came off buggy and with that unfinished feel to them. I don't remember where I've read that so I can't tell how true it might be.