CaC19 - Baslakor - Legacy of the Scion

CaC19 - Baslakor - Legacy of the Scion

In this secret (shown in the picture), is there a way to get the LMP and shotgun ammo from behind the fence?
The secret registers when Lara reaches this room and can only get the flares.
Note that the screenshot does not show how Lara got here, so it is not a spoiler.

How do you get this scarab that is trapped by spikes? (I have the other 2 scarabs)

To answer all 3 posts:

1.I'm curious what you mean with both ways? But about the gate:
SpoilerShow
Yes it is possible. Getting over that fence was originally part of the main gameplay, but since not everybody knows Lara's secrets moves, I made it a smaller bonus within the secret!
2. About that scarab:
SpoilerShow
Hang in there! The answer is closer than you think!
Top

Is Lara supposed to climb the back of the giant cat statue. Halfway up there is a high jump/grab like move in the middle of the statue. But Lara can't grab up, and when she drops down her feet jerk. If she is supposed to jump up, it won't work, and the game has come to a dead end.

It seems like Lara is supposed to jump up and drop and will automatically jump again. But that does not happen. Lara just jerks her feet instead. This seems to be a bug.
Top

Never seen such bug before. Yes, after platforming around the cat you have to jump on it's back. After a few small jumps you eventually grab the wall and swing to your left. Can you upload a clip showing the bug?
Top

First, I have no way to make video clips, so that is not possible.

Second, after a few ridiculous moves on a nearby flat tile while lining up a jump to another tile, Lara turned and tried to go through the wall (showing the inside rooms), Lara immediately jumped to the correct square and jumped up. I got to the top and down to the scarab (which is where I am now). I actually thought that "a red herring" was going to be the answer to the spike question, but I couldn't know until I got here.

The jump problem is still a potential bug for some players because I may not be able to replicate how I got to the top.

After I finish the game, if I get the bug again tomorrow while trying to jump up from a savegame, then I'll post that savegame at the jump problem tile.

I'll explain the 2 methods for that secret when I finish the game, in case there is something useful to the first method that I have not yet encountered. Both methods are part of the normal gameplay.

After your earlier post, I tried using the TR1 fence pass-thru bug for the secret room, but I could not get it to work.
Top

Glad you managed to bypass that one though! Looking forward to further info there.

The level does not have pixel-perfect moves to get where you want to go. Sometimes a simple, elegant move is enough to get over a fence.
Top

Lara is looking at what seems to be a door at the start of this room. How does it open?
[Lara is at the place she reached after jumping on the symbol tiles.]

Thanks for the reply, but you misunderstood my post. I wanted to know if the door (if that is what it is) at the "climb up" start of the room ever opens in the game. The picture was made after crossing the room with the correct code tiles. I had already finished the game when I made that post, and did everything in that room which is deliberately not shown in the picture to prevent spoilers.

But thanks for trying to help.
Top

I played the game using your first release version that was on the google drive, so the jump problem might be accidentally fixed in your updated release. In any case, here is a savegame from that first release where Lara cannot grab up to the next flat ledge on the giant cat statue that she is supposed to do.

Regarding the secret with the fence:
Thanks for the hint. I generally forget about trying that, but it is easy to cross the fence and get the other pickups.
As I said, there are 2 ways to open the wall panel leading to that secret:
SpoilerShow
1. The wall switch behind a mummy in the symbol tile puzzle room. If that switch is used first, it opens the wall panel. If that switch is used after using the second way below, then the switch closes the wall panel, and you need to pull the switch back up to open it again as the screenshot shows. I assume that was your intended method.
2. Stepping on the 2 trigger tiles in the recesses nearby to the secret (where the 2 panthers are killed upstairs) will open the secret panel if the switch in method 1 was not used. If the secret panel is already open by the switch, then stepping on those tiles has no effect. They only open the panel, whereas the symbol tile room switch will open and close the secret room wall panel.

If there is another purpose to having both methods used simultaneously (which can be done by using the wall switch to close the panel and then stepping on the trigger tiles even a second time), then I never found out.
I found the game very enjoyable and well done. It is definitely one of the better customelevels, not just CaC19. I only wish it had more stuff because the TR1 and Unfinished Business Egypt levels were among my most favorite all-time levels. They were very popular on the tombraiders.com forum in the late 1990s when people kept discovering hidden treasures by Core Design. It is too bad that the original versions of these games are generally unplayable on current computers because they were 16 bit DOS games.

Thanks for a pleasurable experience.
Top

Thanks for a pleasurable experience.

Thanks for the kind words! (and the savefile) I completely forgot about that second way to open the secret! I had it in very early design stage, but later switched it (bad pun intended). Somehow forgot to remove it, but I kinda like to have this alternative way as well (note: If you kill the mummies, the switch doesn't work anymore).

About that door, it's a fake. Can't be opened.

Baslakor,
Thanks for the info. However, I did kill all of the mummies and the switch did work (it also works when they are not killed and attack Lara). Maybe you mean that it doesn't work in the updated version, but it does in the first release.
Top

TombTitan wrote: ↑
05 Nov 2019 23:08
Is Lara supposed to climb the back of the giant cat statue. Halfway up there is a high jump/grab like move in the middle of the statue. But Lara can't grab up, and when she drops down her feet jerk. If she is supposed to jump up, it won't work, and the game has come to a dead end.

It seems like Lara is supposed to jump up and drop and will automatically jump again. But that does not happen. Lara just jerks her feet instead. This seems to be a bug.

I have the same problem TombTitan. Thanks for the save but it crashes the game. Anyone have a save at this point that works? 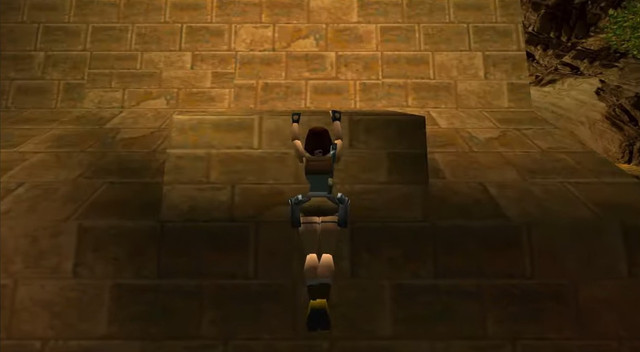 Users browsing this forum: No registered users and 68 guests