Ok I remember this big cage, I will resume my backups and look, I hope it is not very far and I will be able to access it.
thanks
Top

Found it and opened a Door down on the Ground

After using the star key I reached a bridge area over a flowing waterfall where I killed three leopards and apparently have hit a dead end. There's a raised block down the waterfall and a locked door on the bridge, and I scooped the area twice looking for anything of interest and still came empty handed. Any hints?
Raider Daze (pt-br) | Do more of what makes you happy!
Top

Thanks! Don't know how I missed that twice lol.

Made some more progress and now I need to raise two trapdoors to drop a pushblock. Had no problems with the left side and got the secret there too, but how do I trigger these swinging blades so I can actually move by them? They're still yet the collision box is making my navigation obviously wrong. I got as far as triggering the rolling ball, which probably would have flooded the area with the underwater lever I want to reach, but can't dodge it as it stands. 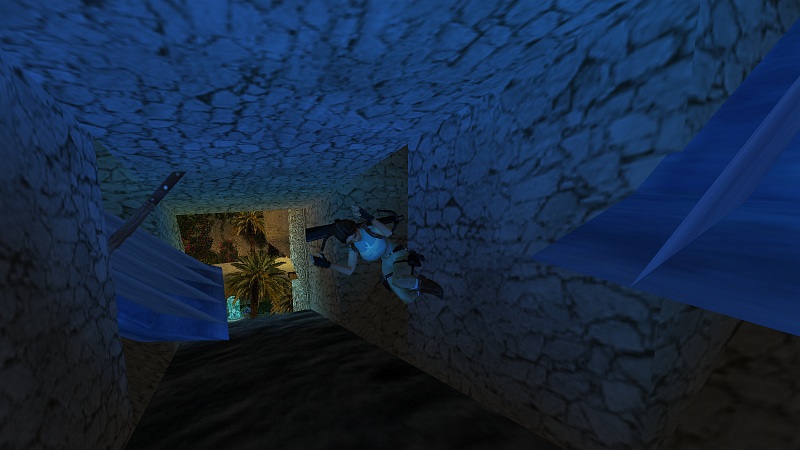 EDIT/
So I went back and I think I'm now done with the initial tower/cage area, as I left with one prayer after the torch puzzle (had completely missed it before). I've returned to this area but am still looking for two keyholes - I have both ornate and unicorn keys in my inventory.


EDIT2/
Ok so I re-read the posts and realized I could go up that watery slope (didn't notice the climbing wall) and used the key to find myself on the other side of the rolling boulder passages. I'm going to guess a wrong version of the .tom file was supplied here, as you can simply climb through beneath the doors and they open from inside and what's more, on the other end of that watery slope I approached a gate and it opened, then I spent the other key I had for a jump sequence to a button with a camera shot of said gate. Seems the "quick" trigger to open on approach was forgotten from a betatesting version (unless the button did something else and I'm not aware. Unlikely though.)
Raider Daze (pt-br) | Do more of what makes you happy!
Top

Help me here, please. In the room where Lara finds the crossbow under a sarcophagus and there's a block with a cliable chain and fire below but the trapdoor on the ceiling is closed and she also needs a crowbar for a door in the next room, what am I supposed to do after getting the crossbow? Cause I really don't know...

there is a lever nearby to the trapdoor
Top

Ok, I haven't seen it but I will now. Thanks.

Just tell me something, please: is this a kind of "open" level? As in you get to a place nearby (in this case a room with three floors on the other side of the chasm, after the fight with the "shiva") but you have to go somewhere else (for instance, the huge space if you open the crowbar door below) in order to complete whichever task you have here?

Let me confess: I probably only watch half of the flybies and I do it kind of distractedly. In this case it was even less because as it was running I was thinking I really probably should go to that room across the chasm before. But I was wrong!

I'm on the walkway in the huge room whose door Lara opens with the sword and totally lost. I think I should get up or down or sideways (lol) but I'm actually clueless.

I'm in the room with the big golden cage hanging over a bridge and I haven't figured how to go up to the upper levels to reach the thing on the top of it.
anyway the wind blows...
Top